The Law of the Land: Legal Issues of Owning an Exotic Pet

Since 2016, 440 exotic animal incidents (including the illegal possession animals, abandoned and escaped animals, and attacks resulting in animal/human injury or deaths) were reported in the United States, according to a report from Born Free USA.

Lt. Wayne Hubbard works in the Special Permit Unit of the Georgia Department of Natural Resources which enforces the laws pertaining to illegal pets.

“There seems to be a misconception that when an animal is taken, for whatever reason, that they will be euthanized.  This is simply not the case,” Lt. Hubbard said. “The only time an animal would be euthanized is if it is in such poor health that it is the only humane alternative or if the situation involves a public health issue such as a bite or scratch from a possible rabid animal.”

A number of animal rescues and sanctuaries exist in Georgia that take in these confiscated pets.

Wayne Esarove volunteers at Noah’s Ark, an animal sanctuary in Locust Grove that stretches 250 acres and is home to over 1,500 exotic, wildlife and domesticated animals. Esarove works at the sanctuary every week to educate visitors about exotic animals and how, in most cases, the decision to own one as a pet is a mistake. 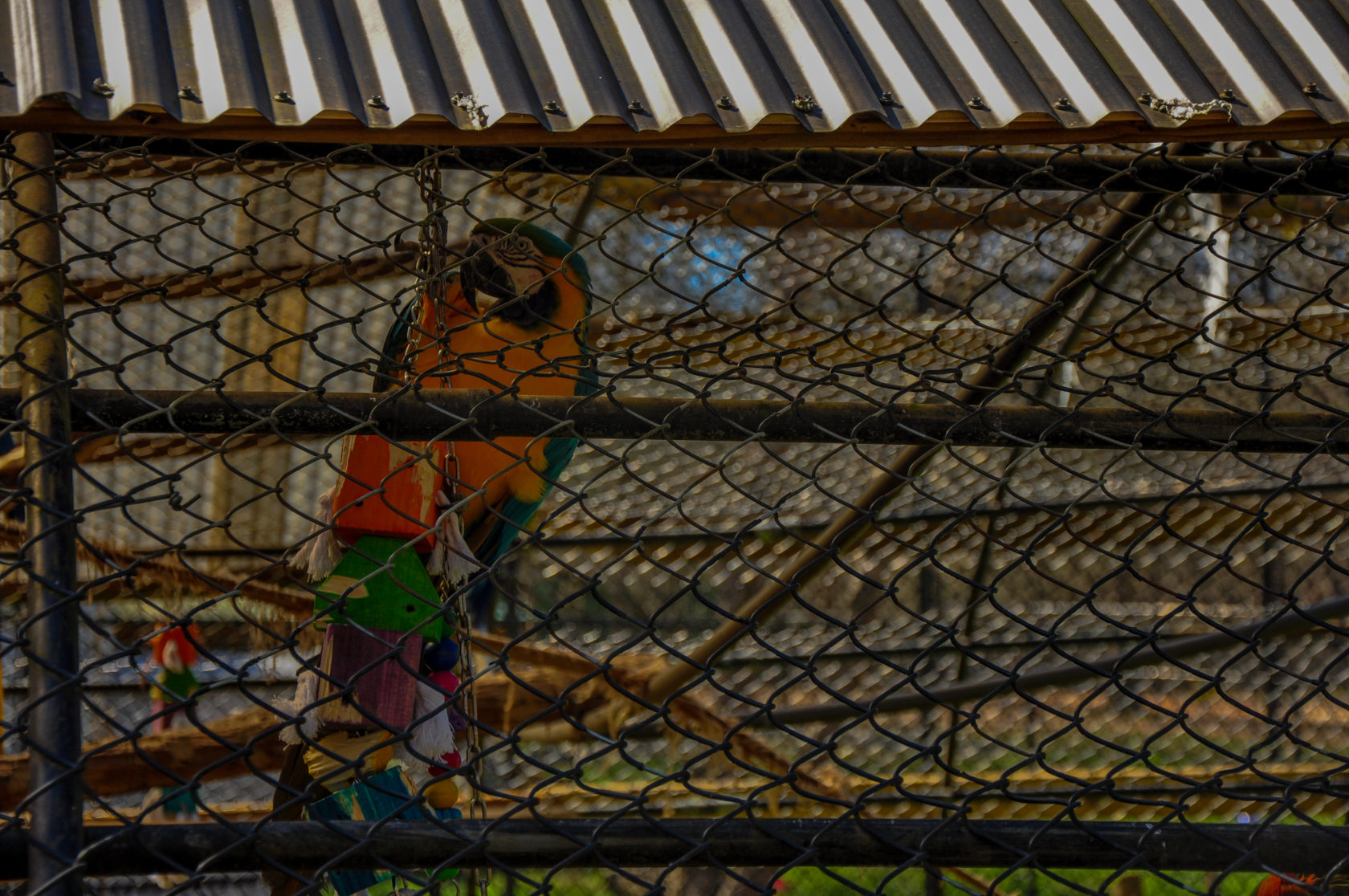 The macaw is a popular exotic pet. Noah’s Ark, an animal sanctuary in Locust Grove, has more than 300 macaws and parrots that were surrendered after people changed their minds about owning them as pets. Photo by Amanda Keuler

“Most of the animals that people are interested in acquiring as exotic animals are parrots, macaws, primates and there are even some people that want to own big cats,” Esarove said.

Esarove believes owning these exotic animals as pets in a home is usually a mistake.

“Exotic animals, even for professionals, are a risk and they’re a full-time job.” Esarove said. “You just can’t acquire a parrot or a macaw or a primate and just play with it a few hours a day and then leave it caged up.”

These sanctuaries take in animals that have been surrendered by previous owners, abandon, or seized by the police because they were illegally possessed as pets.

Noah’s Ark is famous for being the home to an unlikely friendship between Baloo the bear, Leo the lion and Shere Khan the tiger.

The trio, nicknamed “The BLT,” has been together over 15 years. All three were confiscated as cubs from a basement during a drug raid.

Esarove believes the U.S. could do so much more to protect exotic animals from the same misfortune “The BLT” endured so early in their lives.

“In this country, in my opinion, we have very poor laws when it comes to who can own exotic animals and who can breed them.” Esarove said. “You can buy all kinds of exotic animals online, even though it’s illegal to import them into the United State, there are plenty of breeders and still some smuggling that goes on.” 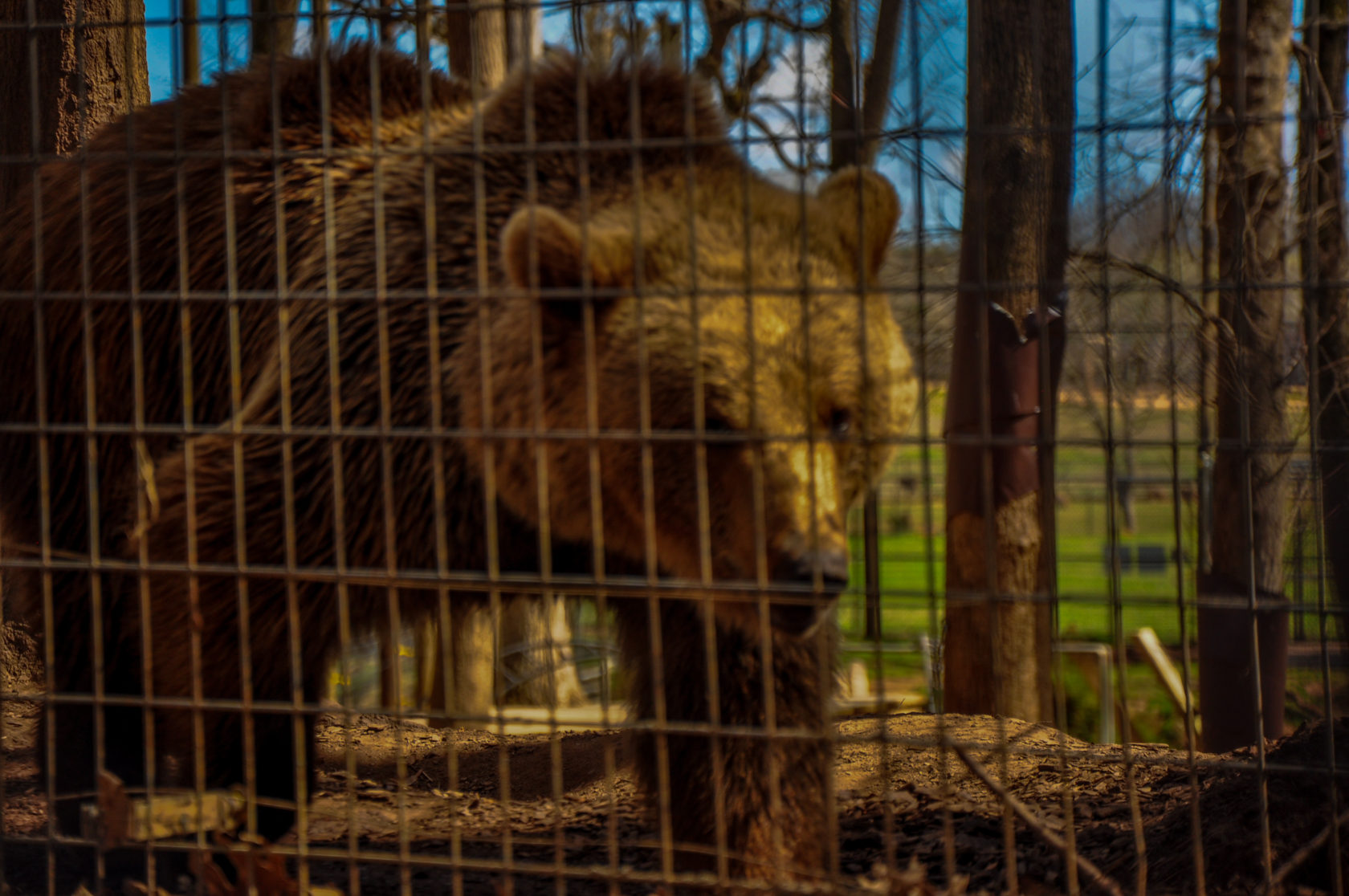 Anna Lou, a brown bear rescued by Noah’s Ark located in Locust Grove, was taken from her mother shortly after birth to be used in public encounters. Brown bears are banned as dangerous pets in Georgia. Photo by Amanda Keuler

“Under Georgia law ‘wildlife’ means any animal which is native to the state and ‘wild animal’ means animals not native to Georgia,” Lt. Hubbard said.  “Some of the illegal pets fall into each of these categories,” he continued. “The common term  ‘exotic’  would refer to wild animals in this case.”

Law enforcement sees both types of animals held illegally as pets in Georgia.

“[T]he most common illegal pets that we deal with are wildlife species, such as raccoons, skunks, deer, and various reptiles, as well as wild animal (exotic) species, such as hedgehogs and non-native venomous snakes,” Lt. Hubbard said.

Alabama, South Carolina, and North Carolina are not as strict and do not have any laws banning exotic animals as pets, according to the Humane Society. Tennessee and Florida only have a partial ban on the possession of exotic and dangerous animals. 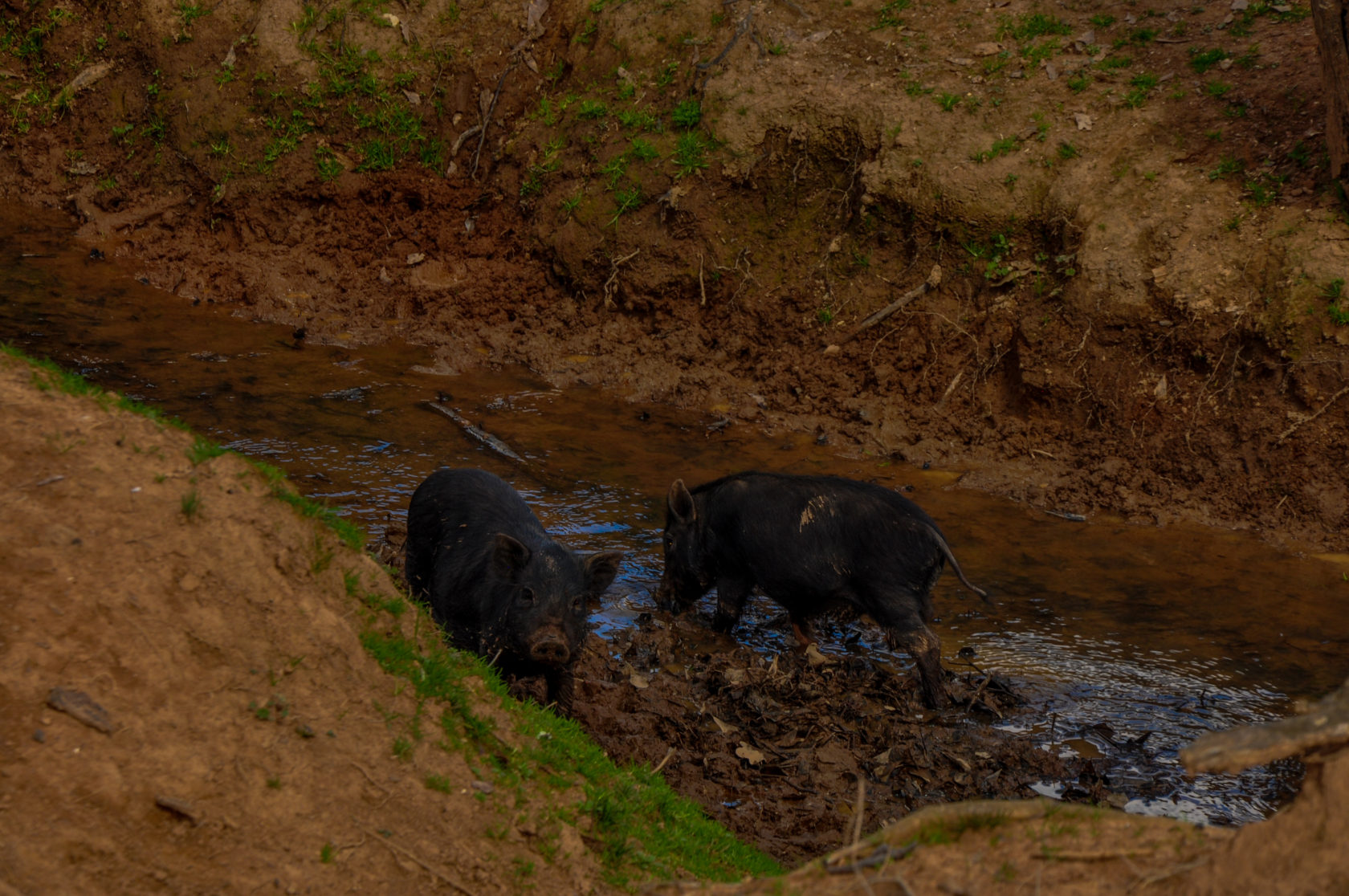 Even though they can make good pets, pigs need plenty of attention and room to root. Here, two pigs take a mud bath in a creek bed at Noah’s Ark, an animal sanctuary in Locust Grove. The sanctuary is home to 40 pigs that range in sizes from 75 to 600 lbs. These pigs ended up in Noah’s Ark because they were unwanted pets after growing too large, saved from slaughter or were found as strays by animal control. Photo by Amanda Keuler

Some animals deemed exotic or unusual can live and thrive as household pets. For example, the pot-bellied pig can be housebroken like a dog or cat.

Even still, Noah’s Ark continues to take in unwanted pigs that were once household pets.

“[The owners] thought it would be fun to have a pet pig until they realized what it takes to take care of a pet pig,” Esarove said, explaining why even animals capable of domestication end up at Noah’s Ark.

How does a potential new pet owner avoid similar endings with their unusual pet?

Education is also important to ensure pet ownership of the animal is legal. The pot-bellied pig, for example, is illegal to own in certain areas.

Some laws restricting ownership of exotic or wildlife as pets are enforced statewide by the Georgia Department of Natural Resources Law Enforcement Division. These are not the only laws a person should research.

“Local ordinances regulating the possession of animals within their jurisdictions may be implemented by counties and/or cities,” Lt. Hubbard explained. “In order to find out about these ordinances a person should call their county managers office or county  sheriff’s department and/or their city hall or city police department.”